The Ride: being heard 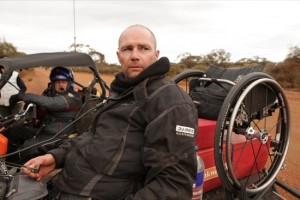 This is an image from The Ride. where Anton visits the site of his accident.

Everywhere I look this year its been about people taking the leap out on their own, not waiting until the proverbial knock on the door, they just decide to sort it.

Ive always harbored a secret dream to make a documentary – I haven’t really gotten to the stage of actually knowing what it will be about (which is a bit of a flaw in said dream) but there is something about putting people in front of a camera and helping them unravel the layers of their experience. We can learn so much from watching the journey’s of others. It makes us more grateful, its gives us perspective on the minutiae of our day to day existence.

Kath McIntyre is putting herself out there, she is a grief and loss counselor and a filmmaker. She provides the space between learning and teaching others. Here is my chat with her about the documentary The Ride – about her experience and about how you can spread the word.

Kath, tell me a little about you. How does your background in the grief field help you in making documentaries about people coping with trauma?

I have worked in the film industry for nearly 20 years as an assistant director in drama and a documentary director/ producer. I usually spend up to a year with a person and their family making the film.  I was always concerned that filmmakers often come into someones lives during a traumatic incident -whilst they are in crisis and then leave. I never felt comfortable with that way of making films, so I  decided  to study grief and palliative care counselling at Adelaide University so I would have the skills to be able to not only tell their story but also help the people I was making the film about.

The Ride is a film about resilience and human spirit, what resonated the most with you in working with the four men?

The Ride is about  four Aussie blokes who swap wheelchairs for quad bikes and embark on the ride of their lives. This documentary charts their 5,000km adventure across the outback, as they visit the crash sites where their lives changed forever. Three men are paraplegics and one a quadriplegic, making this no ordinary road movie. Their encounters with mud, deserts, floods and exhaustion test their resilience and endurance to breaking point. The Ride is a wild traverse across the terrain of the human spirit, as four men make peace with the tragedy of their past.

Its filled with bold humour and honesty. I thought that honesty  and the way the four guys  let us into their world  was amazing. They allowed the audience a behind the scenes look into their personal tragedy and to see them finally accept what had happened in the past.

When people imagine a life altering event – like the one the guys in the film endured -they think that the space between their old life and the new one will be focused on the negative. What are some of the opportunities you saw for people to grow from trauma?

I think the film shows that everybody copes with trauma in different ways and that we are all individuals. Everyone will grieve and hopefully eventually restore their lives in their own time. I think the opportunity the film gave the guys to tell their story helped  have their pain and bravery acknowledged.I believe strongly in people telling their story and having the pain acknowledged and being heard.

How can people help in getting stories like The Ride told ?

Ive asked Kath to let me know when the documentary is in my area. Jump over here and like The Ride on Facebook and share with your mates.

Thanks Kath, best of luck with the project.

Do you think if life threw you a curve ball you could draw a line in the sand and work out ways to embrace your new life?

Linking up with Essentially Jess!

A safe place to mourn – a TSIB interview