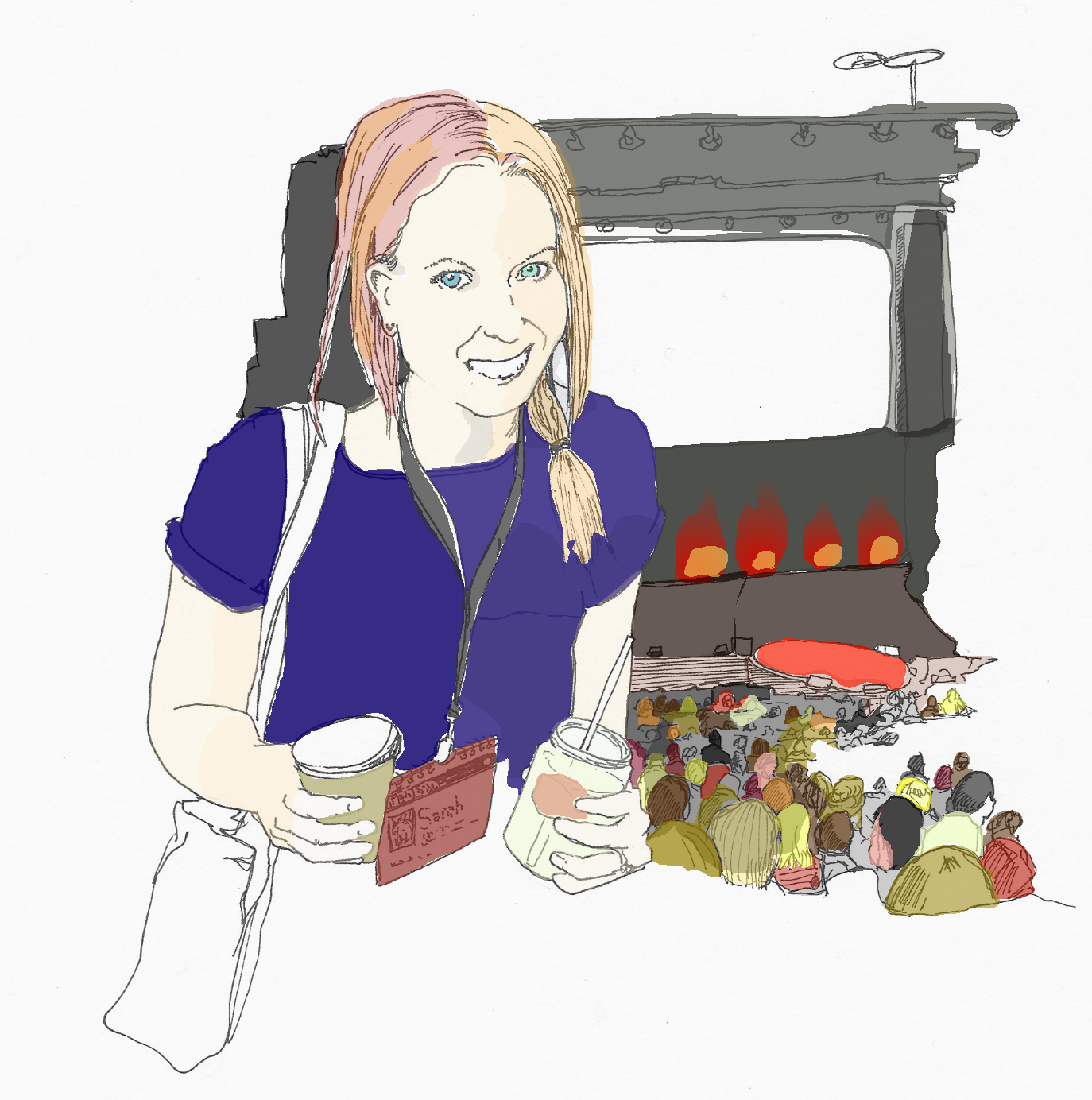 My top five take-homes from #TedxSydney 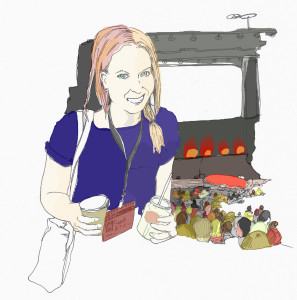 Sometimes when a thought is triggered there is no alternative but to stop and listen to it. It might be a slow burning idea that sits deep down but the more you try to silence it the louder it can become.

TedxSydney had an energy, a Castle-like vibe that doesn’t tend to come from attending a work conference or a seminar on a topic you’re interested in. Suddenly the 2000 people that had grabbed a ticket all looked like someone I might want to stop and have a chat with. I should have thought better about the talk to me about missing people hanging from my lanyard and maybe more about talk to me about my secret desire to be Annabel Crabb when  grow up. Next time.

Oh and the pic up here ^^ thats me on the day drawn by this dude.

13 hours trapped within the majestic Sydney Opera House is bound to have a good effect on anyone so rather than tell you what I ate (the best nougat ever) what I drank (too much in too little time) and who I talked to (lotsa people, lotsa hand shakes, lotsa nodding and smiling) I thought Id list the top 5 things that stood out to me on the day for you all to read, digest and maybe add more to…

1. A cold beer can cause you to stop, change career and find yourself on crutches on stage at the Opera House..

This was Alice Gorman’s story. She found herself staring upwards at some stars back while drinking that beer after a dusty day on an archaeological dig and wondered what the historical significance of satellites might be. She took that thought and turned it into her career long focus on the origins of space exploration from the 1930s to now. She has travelled the world researching space junk, exploring what that ‘junk’ tells us about who we are, who built it, and just generally contributing to the cultural heritage of the stuff that’s out there.

Ive decided Im going to drink more beer late at night and look up. Who knows what Ill work out?

2. Challenge yourself when raising your daughters. Embrace the power of them being makers not consumers.

Marita Cheng, former Young Australian of the year, spoke about founding Robogals Global – a place where young women are inspired to become engineers, about making things, about having enquiring minds, about understanding the why and the how of things. I tweeted Marita afterwards, I wanted her to come over for dinner and meet my girls. Her infectious enthusiasm and the way she spreads ideas are ones that my babies need to hear. Im sure she’ll turn up soon…

For me I think instead of just telling the girls how stuff works Ill get them to research it for themselves. A bit of critical thinking never hurt anyone.

3. Acknowledge the people that reach out to help you. Even though you have to rely on their help to get you where you need to go.

Ron McCallum was the first speaker of the day. I guess I hadnt given much time or thought to who would speak, I just let myself think Id be dazzled by the day.

Ron is an Industrial and Discrimination Lawyer – he’s well known. My brother in law even knows him. He was the first blind man appointed to a full professorship at any Australian University.

His talk wasnt on the way of the Law it was on the way technology has enabled him to follow his passion – born blind he recalled the pivotal moment as a three year old reaching out to the picture book his mother read him. She told him ‘darling you will never see the words’ the sadness of me imagining having to say that to my own children made me feel so connected to his tale of simple bed time stories.

For many of us when we talk about the merging of technology with the past time of reading we often complain about the way in which computers detract from the warmth of the written word. What about people who, without the advances of technology, have no access to such a vast array of material. Ron acknowledged the volunteers – the students, the teachers, his family – who had read texts on to cassette tapes in the early days in order for him to complete his studies. He plotted the changes, the costs and the impacts on technology on the way in which he devoured all that he had to read. He spoke so lovingly about the role of others in helping him achieve his ideas, his passions meaning that you almost felt that he was speaking individually to each of those people who helped him along the way as he stood facing the audience.

At the end of his talk he turned and went to walk off stage with the help of his wife. He stopped after a few moments and turned and without sight told us he could feel the warmth, our standing ovation. The tears that sprang from the audience all seemed to be thanking him in sharing his wisdom. Ive teared up a few times telling that story to my husband even a week later..

Ron speaks volumes to the art of getting where you want to go and acknowledging those that walked along the way with you.

4. The big names are not necessarily the names we should familiarise ourselves with.

Do you know who Benny Wenda? I didnt until I heard Jennifer Robinson talk.

The reason why I wanted to hear her wasnt about her role in West Papua but the face Id seen standing behind Julian Assange over the years. Jennifer is a human rights lawyer – raised and education in Australia – who found herself involved in the advocacy and self determination struggle West Papuans have been striving for in conflict with the Indonesian Government for many many years. She travelled there as a Law Student and has been advocating for the rights of disconnected people since witnessing human rights violations. Her talk about the struggles of freedom fighter Benny, his imprisonment, his asylum seeking in the UK, his reunion with his family and Jennifers role as a Pro Bono Hero were awe inspiring to listen to right up until the moment that Benny joined her on the stage.

5. Its OK to be a social sticky beak it can lead to great things.

Rebecca Huntley describes herself as a professional eavesdropper. She also has great curly hair. Two wins for me. In Rebecca’s role as the Director of The Mind and Mood Report (a social trend reports service that looks at the ways in which we function, define ourselves as a society) she found that people don’t connect with labels, with the terms we apply – particularly to collectives  in describing who the are and what background they have. Think about it, would you ever describe yourself as a ‘battler’ or a ‘working family’? No, but we do often describe others by the labels that we wouldn’t use ourselves?  It always reminds me of that dreadful ad for women’s vitamins growing up ‘well, Im a single mum with a daughter’. Although during my short period as a single mum it did entertain me to introduce myself as this.

Rebecca spoke about the ways that people don’t want to emphasise their differences, they crave to be the same. Whats interesting though is that in reverse when we describe others we will point out the differences – to distance ourselves from others.

So the take home for me…labels are for jars not people, people! I’m going to try harder to not refer to others as by the labels that bind and confine us, Ill try to just think of us all as the same. In some shape or form.

So thats it for me…I can safely say it was one of the best days Ive had, well, in as long as I can remember. I felt at home amongst a group of strangers. I laughed. I cried and I reminded myself that there is always space in the world for interesting ideas, even if other people dont understand yours straight away. Even if you dont necessarily understand them yourself.

Oh and if you’re not already Tedxsydney’d out watch this. As I sat near the back of the house with my tummy grumbling I can safely say Ive never been more excited to get out of my seat and see what had been created from this amazing grow-it-local endeavor.