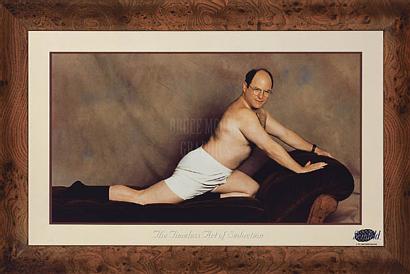 George Costanza and me 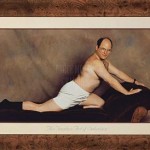 Seinfeld was a great show….I miss George the most.

One of the episodes that made me laugh (other than the one where he ate cake out of the bin…I would never do that) was when he was at a childrens party and the fire alarm went off. Instead of being the stoic, brave male he ran screaming like a baby pushing people out of the way to save himself.

I went to see a psychotherapist this week for some career advice. As you do. She was an interesting woman who had all of those things that Id like. A nice little practice in a nice little suburb near some nice little coffee shops. She was also very black and white. I laid out (metaphorically speaking…there was no lounge to recline on like Betty in Mad Men) all of the things I was managing and juggling and dropping at the moment and I asked her to tell me what I should hold on to and what I should let go so that life would flow better. She explained to me that the constant raising your hand in the air saying “I can do that’ and then secretly getting cranky with yourself about having to do everything meant that you allow others to place all of their burdens on to you. That I needed to be firmer with my NO and that I needed to work out what was in it for me, if it didnt pay, if it didnt suit, if it really wasnt my role that I should not use my time when it was taking me away from what I was working towards (which is the first 2 chapters of my thesis but Im hiding from those, so they dont count).

She explained that mums and stepmums have higher levels of cortisol running through them from continual exposure to stress. It makes you more jumpy, makes it harder to feel calm and it makes it harder to get back to some semblance of equilibrium.

I think we get so used to running on adrenalin, running to do things, to fix things that there are no moments for stillness to be able to wind down and just stop. I think in the midst of disaster or just everyday life we react as a reflection of how we are feeling and coping. I get the need to run and shriek like George and I don’t even have to be running from a fire. How great would it be to be the person that knows what they want, that can confidently look someone in the eye and say No and to react without hysteria…if I was all these things I wouldn’t know myself.

I wouldn’t be myself.

I kinda like the crazy George way I live my life and while I try to take on board all the ideas that people have in living a simpler life, the general busy-ness is actually your life in between the times when you achieve stuff. If I didn’t get down and dirty in that busy-ness then Id be missing out on some pretty funny and crazy things along the way.

Im embracing my George-ness…without the cake. Well not the cake in the bin…

I also married a man with no hair…I wonder what that means?